Gallons of ink, acres of newsprint, miles of typewriter ribbon and now, thousands of printer cartridges have been used to discuss Joan Crawford, Bette Davis, and their parenting practices. Indeed, entire books dedicated to the negative aspects of the two women as mothers were written by their daughters. While agreeing that the truth about the accusations outlined in these books is probably somewhere in the middle of the “good/bad parenting” spectrum, the positive aspects of both star’s approaches to motherhood often go unexamined.

Joan Crawford grew up unwanted by her mother and without knowing who her father was.

By the time Joan Crawford decided that the demands of her movie career could be balanced with motherhood, she was a mature woman and unable to have children of her own. Working with her attorney and sometimes lover, Greg Bautzer, the movie star adopted her daughter Christina and soon after, her son Christopher. The first order of business for the movie star was to find her babies a suitable father. Joan “tested” a host of candidates for the role, settling on the kind, but rather ineffectual actor Philip Terry. Years passed before Joan decided to adopt two infant girls she called “the twins.” (Whether the two babies were actually twins is up for debate). The adoption of these cherubs just happened to coincide with Bette Davis giving birth to a beautiful baby girl.

While Joan was often preoccupied with making sure her children didn’t turn out to be spoiled Hollywood brats, she also worked hard to make sure that they had the happy childhood she never experienced. She often had her children on the set and would take them with her on location, especially if she thought they would enjoy the trip. When she was in Arizona filming the western Johnny Guitar (1954), Joan made sure her son Christopher came along because she knew he was obsessed with cowboys and horses. She even sent him to a nearby dude ranch for a week near the end of the shoot.

When Joan wasn’t making a picture, she enjoyed piling her four children and their dog into the family station wagon for cross-country road trips or a picnic complete with soda pop and a triple-layer chocolate cake. After Joan wed fourth husband, Pepsi president Alfred Steele, the Crawford family traveled around the world (often for the company), but always in first class. During the hot California summer nights, Joan and her four kids also had impromptu camp-outs in sleeping bags by the pool.

Years later, when Christina Crawford wanted to become an actress, Joan called in every favor she could to get her oldest daughter jobs on television and in movies. The star also allowed Christina to live in her California apartment rent free shortly before her daughter began working on the book that would destroy Joan’s reputation as a mother permanently. 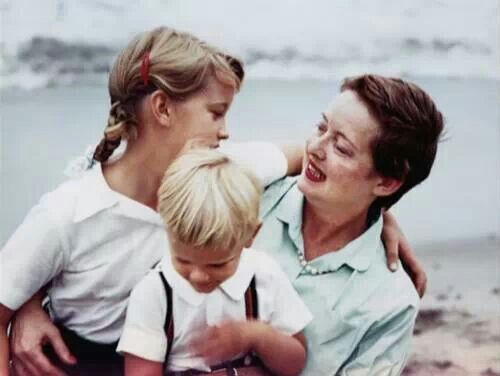 Bette Davis grew up her mother’s favorite, but abandoned by her father.

A beautifully blond baby girl was born to film star Bette Davis on May 1, 1947, and one of the most important relationships of Bette’s life began. Both the fact that little Barbara Davis (nicknamed B.D. by her famous mother) was an only child for the first three years of her life, and the fact that B.D. was the only child her mother would give birth to, served to tie the two together with unbreakable bonds—at least in Bette’s mind.

Miss Davis took her daughter with her wherever she went throughout B.D.’s childhood. Always a bright little girl, Bette celebrated the fact that her daughter was equipped with a mind of her own. In fact, when B.D. was eleven years old, Miss Davis threw a huge birthday party for her and declared to one and all that little Barbara was “now an adult.”

In fact, by the time she was twelve, B.D. had become a not only a smart and beautiful young girl but a sometimes model as well. With such a “fast-tracked” existence, it is not surprising that the young woman fell madly in love with twenty-nine year old studio executive and Englishman, Jeremy Hyman. In keeping with her feeling that B.D. always knew her own mind, Bette reluctantly consented to her daughter’s early marriage even though she originally envisioned B.D. sharing her entire life with her doting mother. B.D. and Jeremy were wed in a ceremony fit for a Hollywood princess (courtesy of Bette) when B.D. was but sixteen.

When Bette Davis wed her handsome All About Eve co-star Gary Merrill in 1950, one of his conditions was that the couple adopt. Since Merrill wanted a son, a blond, blue-eyed baby boy they named Michael was adopted shortly after their marriage. While Gary was away on location, Bette took it upon herself to adopt baby Margot, who rounded out the Merrill family. While the Davis/Merrill marriage ended in divorce after ten years, Bette did her best to give her children a loving and normal family life, making family meals and doing her own housekeeping when she wasn’t making a film.

Little Margot would undergo a tragic accident resulting in a head-injury that left her intellectually disabled for the rest of her life. Bette and Gary eventually decided to put their daughter in a special school, but while she sometimes lost patience with her youngest daughter’s behavior, Bette did her best to keep Margo with her whenever she could. While Michael Merrill was closer to his father than his mother, Bette was exceedingly proud of her handsome son who eventually became an attorney.

In later years, Bette loved to invite her children, their spouses and her grandchildren to her home for family weekends, planning activities and preparing lavish meals for their enjoyment. While these gatherings were not without their conflicts, the film star tended to forget any problems between visits and couldn’t wait to host her family again when the opportunity arose.

Always feeling that her children (particularly B.D.) deserved the best that life had to offer, Miss Davis worked long past retirement age in order to underwrite her children’s lives, even after B.D. wrote My Mother’s Keeper, the tell-all that would emotionally crush her mother.