Torch singer and sometime MGM starlet Dolores Gray decided early on to grab life with both hands and never let go. Born in Chicago to the mother of all stage mothers on June 7 somewhere between 1924 and 1930, Gray was the victim of gang violence as a young teenager, leaving her with a bullet in her lung which would remained there for the rest of her life.

But a little thing like a bullet couldn’t stop the young Dolores from reaching for her dream of becoming a star. When dancing didn’t work out, the young woman and her mother decided to develop her singing voice. Possessed of a big and brassy instrument, the teenaged Gray became the girl singer for a big band and began showing up on the nightclub stages of Hollywood. At 15, Dolores was “discovered” by Rudy Vallee who decided to give the young girl a regular spot his radio show.

Before long, Republic studios hired Dolores to play a cameo in its production of Lady for a Night (1942) and by 1944, she had landed a tiny part as a nightclub singer in the Warner Brothers Bette Davis vehicle, Mr. Skeffington. Later that same year, Gray was tapped by Broadway impresario Billy Rose to appear in his production of the Cole Porter review, The Seven Lively Arts.

But only a month into the show, Gray raised a stink because she wasn’t allowed to sing one of the show-stopping numbers Every Time We Say Goodbye. When the singer discovered that her tantrums were useless, Dolores quit the show and her role went to the unknown Helen Gallagher. Although the production was no hit, it made Gallegher a star.

With success eluding her, Dolores wandered from Broadway show to Broadway show. After understudying Ethel Merman in Annie Get Your Gun, she auditioned for the starring role in the London production. Rogers and Hammerstein thought she was all wrong, but Mary Martin urged the producers to give Dolores another chance. Gray swept into the audition, brushed aside Oscar Hammerstein’s compliments about her looks, and dove into the opening bars of How Deep Is the Ocean. Before the belter finished the number, Hammerstein held up a hand to stop her. “That’s enough,” he said, and handed her the script. After one more session with the singer, Gray was given the part. She was twenty-two.

Annie Get Your Gun opened on June 7, 1947 and was a smash hit, and Dolores as the darling of the London stage for the next three years. In fact, Annie held the record for the longest run of any show at the Coliseum and ended with Gray and her co-star sitting at the edge of the stage long after the stagehands had cleared all remnants of the show away, singing I’ll Be Seeing You to an audience that refused to leave.

The British had taken the over-the-top star to their hearts. But then, how could they help but love a woman who brought her beloved cat over from America in its own cabin on the HMS Queen Elizabeth?

While Dolores had grabbed red-hot fame in London, she returned to her own country as a virtual unknown. The singer took a part co-starring with Bert Lahr in a role Lena Horne had rejected in Two on the Aisle, but Gray couldn’t deal with Lahr’s dark moods. In fact, the two learned to hate each other thoroughly. When it came time for the show to go on tour, Bert refused to work with Gray any longer, saying the sight of his leggy co-star made him, “physically ill.”

On the recording front, Decca Records signed Gray, and the singer’s version of Shrimp Boats climbed into the top twenty on the music charts, while Jo Stafford’s version reached number two.

Unable to make her musical mark, the singer turned her attention to television where she landed a recurring role in the short-lived Buick Circus Hour, but soon after, Dolores went back on stage in the musical Carnival in Flanders in which she played the wife of the Mayor of a small Flemish village and won a Tony Award for her pains. Unfortunately, the beleaguered show ran for only six performances. 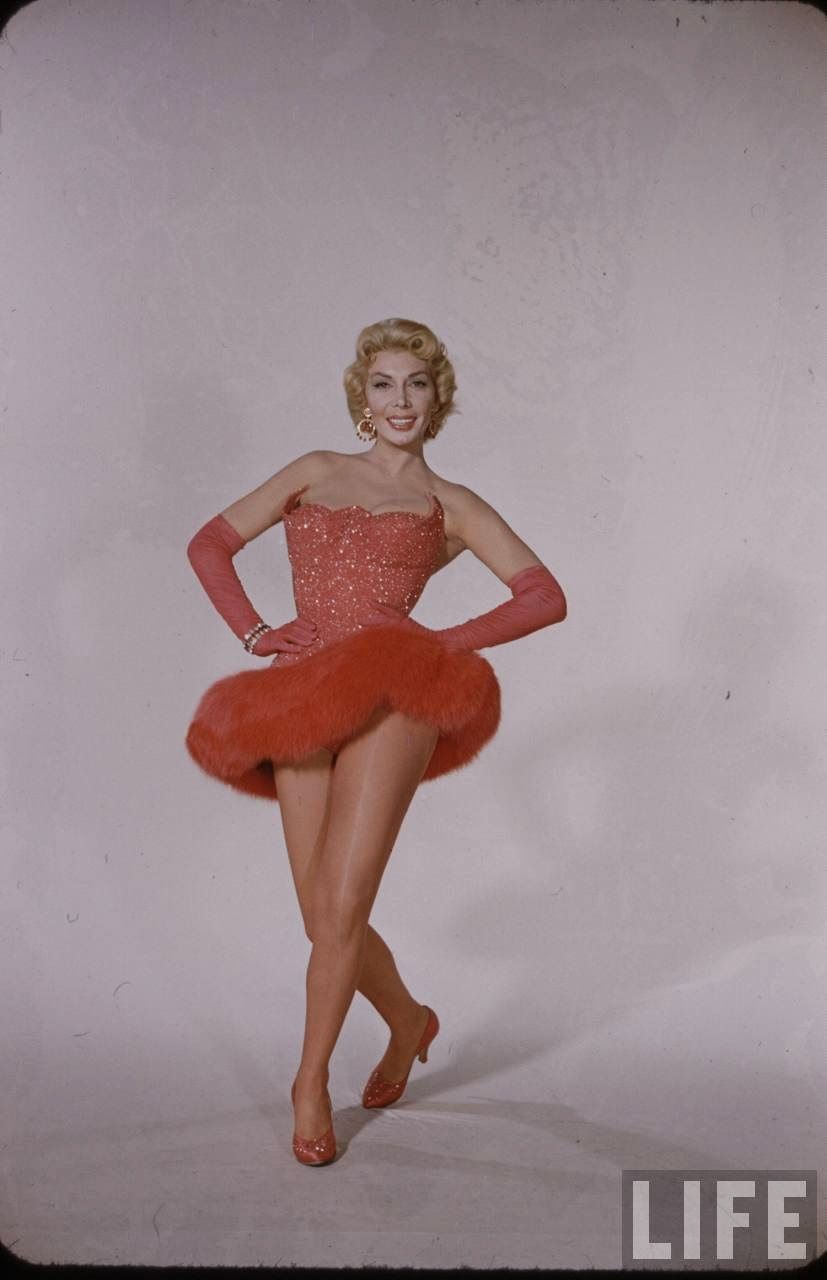 The lady’s prayers for a contract at a major studio were finally answered in 1955, when MGM signed the musical stage star. Dolores immediately went to work in It’s Always Fair Weather (1955) with Gene Kelly and Cyd Charisse. In it, she played television hostess Madeline Bradville and got to sing three decent numbers, but the film had only mediocre box office success. After playing the siren Lalume in MGM’s Kismet (1955), Gray foolishly turned down the role that Kay Thompson eventually made a success in the musical hit Funny Face (1957) with Fred Astaire and Audrey Hepburn.

Dolores did grab the part of gossip fiend Sylvia Fowler in The Opposite Sex, and while Funny Face turned out to be a much better film, Sylvia was a showier role.

After completing Opposite, Gray decided to play the role of yet another television personality in Vincent Minnelli’s production of Designing Women (1957) with Lauren Bacall and Gregory Peck. Dying her blonde locks red, and without an audition, she convinced Minnelli to give her the role of Peck’s old flame.

Dolores glided easily through the role of the arch woman of the world. In one standout scene, Gray got to dump a plate of spaghetti in Gregory Peck’s lap and in another sang, There’ll Be Some Changes Made while blithely undergoing multiple costume changes for her on-screen television show.

Although she made four films at MGM, Dolores didn’t become a star, and the studio dropped her contract.

Miss Gray took on television and nightclubs again until 1959, when she was cast as saloonkeeper, Frenchy in the Broadway musical version of Destry Rides Again opposite Andy Griffith. The experience was not a happy one for Gray. After an argument which ended with the director calling her a “slut” before the entire company, Dolores decided to bitch slap him and her director responded in kind.

Griffith and Gray didn’t exactly get along either during the production. Dolores  refused to talk about the specifics of their conflict in the press, but would only tell friends that Griffith was “not a nice man.” But the two put aside their differences long enough to prove that the show must go on by continuing to sing even when the stage curtain caught fire during a performance.

In 1963, Gray returned in triumph to her beloved London to play the lead in the revue Talk of the Town. Ever the star, Dolores traveled from America with no less than 12 full-length mink coats and two bodyguards. “It is not a very happy life unless you make it very big,” she said.

Dolores became a bride for the first time, tellingly, after her mother died in 1967. She wed Los Angeles real estate tycoon, Andrew Crevolin, and the two were married for nine years, divorced, and then remarried. Their final marriage lasted until Andrew’s death in 1992.

In fact, it was shortly after her marriage that Gray returned to Broadway portraying Loraine Sheldon in Sherry!, the role so charmingly played by her Opposite co-star Ann Sheridan in Warner Brother’s The Man Who Came to Dinner (1942).

By this time Dolores was prone to weight gain and was forbidden by contract from becoming any more zaftig. Having gained weight, the hapless star couldn’t squeeze into the costumes designed for her, so decided to wear a white beaded gown that had belonged to her mother. When he saw the costume change, the show’s designer demanded that his name be taken off the production.

When Sherry! closed, Gray went into retirement, becoming a full-time wife to Andrew and giving society parties. But nine years later she was coaxed out of retirement by the promise of playing Mama Rose in the London production of Gypsy. She later snagged starring roles in 42ndStreet, Goldilocks, and Stephen Sondhiem’s Follies in which the sixty-three-year-old Gray stopped the show with her rendition of I’m Still Here, and even after an injury prohibited her from doing the rest of the show, she continued to do the song from a stool at center stage.

Gray appeared intermittently on stage and television until her death from a heart attack on June 28, 2002. Once, when asked by a reporter if she thought of herself as a survivor, Gray said, “…I did what I wanted to do when I wanted to do it, and, when I when I quit, it was my choice.”

Charles Davis, MSW, is the author of a couple of scientific journal articles, encyclopedia entries, and a chapter in a nursing textbook. He is a public speaker who conducts training on disability law, disability etiquette, sexuality, and learning how to navigate grief as a gay man. Mr. Davis is also obsessed with writing about classic films. View all posts by charlesdavis

2 thoughts on “Dolores Gray: The MGM Starlet Who “Took a Bullet” and Kept on Belting”