My fascination with stage mothers began when I was doing the research for my first book, Jungle Red:The Story of The Women. With a cast of over a hundred, I certainly couldn’t profile every actress who appeared in the unique film, but I did get the opportunity to chronicle the lives of all the leading actresses and many of the outstanding supporting players as well. During my review, one fact kept swimming to the surface over and over again—most of the actresses came from families helmed by single mothers in which a daughter marked for stardom was depended upon to support her entire family by appearing either on stage or in front of a camera, or both. Let’s explore this phenomenon by discussing the lives of four actresses from Hollywood’s Golden Age.

Rosalind Russell and her mother, Clara:

Rosalind Russell’s mother Clara could be described as the “anti-stage mother.” One of seven children in a large, well-to-do, boisterous Catholic family, the young Rosalind did everything she could to be the center of attention. The future comedienne often hid in laundry hampers or even pretended to be dead just to be noticed by her busy parents. When Rosalind reached high school, she found that being on stage kept her in the limelight. The willowy young girl usually found herself playing leading men in all-girl-school productions.

Rosalind might only be playing men, but she played them well, and soon decided to become an actress. The news was not exactly greeted with joy in the Russell family. Indeed, Russell’s mother Clara declared that all actresses were intrinsically evil and headed for perdition. She insisted that her stage-struck daughter become a teacher. Rosalind agreed to study education but took drama classes in secret. Eventually, Clara made an uneasy peace with her daughter’s career choice and was proud of her daughter’s screen success. 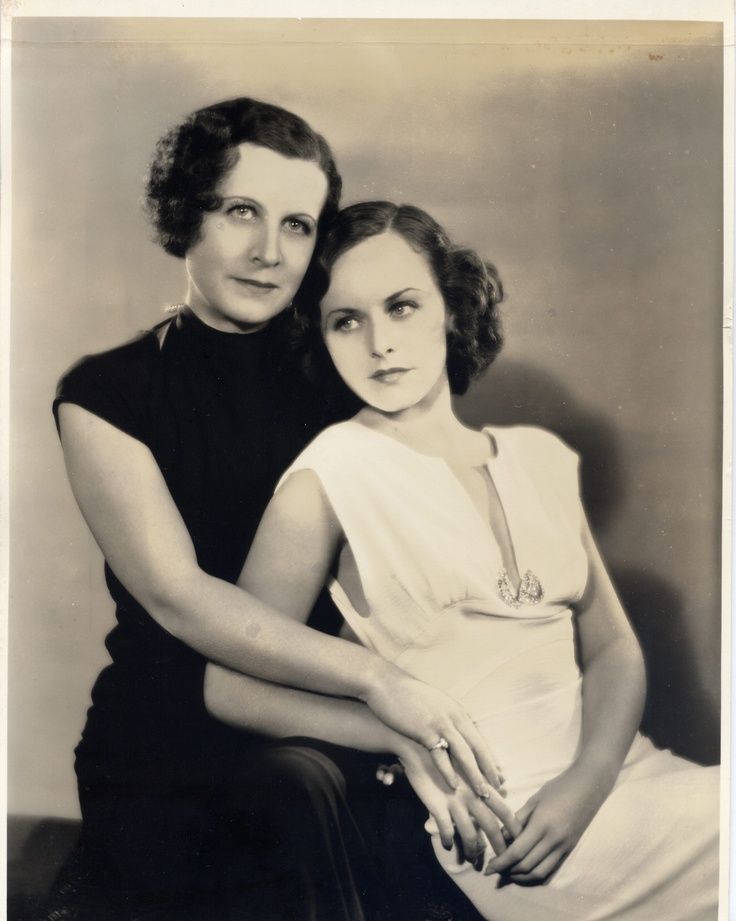 Paulette Goddard and her mother, Alta:

By the time Paulette Goddard was three, her father left her and her pretty mother Alta to fend for themselves. By the time she was twelve, Paulette worked as a child model to help support the two of them. Alta and Paulette even became card sharps on floating gambling casinos as a way of putting a few more pennies in the family piggy bank. Once, when things got tight, Paulette and her mother were forced to subsist on lettuce leaves. At sixteen, pretty Paulette married a lumber baron who had acres of money—all with her mother’s blessing. However, Paulette didn’t enjoy being a wife, and soon divorced her much older husband. She decided to motor to Hollywood and take her chances on becoming a starlet.

Bette Davis and her mother, Ruthie:

Bette Davis and her mother Ruthie had a conflicted relationship, almost from her birth. Bette’s father Harlow treated his two daughters as afterthoughts when he considered them at all. His wife worried about this and responded by spoiling her babies—especially her oldest child, Bette. While loving, Ruthie was a controlling person who always told her children what to do in every situation, no matter how old they were. Since Harlow and Ruthie’s marriage was never a happy one, the gutsy Ruthie decided to divorce her husband, pull up stakes and try her hand at supporting her family on her own. Becoming a photographer, Bette’s resourceful mother managed to send her daughters to private school.

Ruthie knew that her oldest daughter was going to be famous for something. Bette knew she was going to become an actress. Ruthie saw her job as both supporting and pushing her daughter to success, despite the many times Bette was ready to give up on her dreams. Ruthie saw this as her younger daughter Bobby’s job as well. After Bette became a big star, her mother spent the rest of her life enjoying the fruits of Bette’s success.

Joan Crawford and her mother, Anna:

When I interviewed actor, writer and female impersonator, Charles Busch about Joan Crawford and Norma Shearer, he said something that gave me pause. “Remember,” he cautioned, “Joan became as successful and her career had far greater longevity than Norma’s…and she did it all on her own.” I suddenly realized that Mr. Busch was absolutely right. Ninety-nine percent of the actresses I profiled had a strong, sometimes grasping and often ingenious mother behind her—pushing her actress steadily towards their ultimate dream—Hollywood stardom.

Lucille Fay LeSueur was never her mother’s favorite, even as a child. That title went to Joan’s handsome, but feckless older brother, Hal. The lovely little girl did become the favorite of one of a long string of “step fathers” who shared Anna’s bed. Daddy Cassin sexually abused the young girl who was starved for attention.

After nabbing a job as a chorus girl and landing in a couple of Broadway shows, Lucille was “discovered” by L.B. Mayer’s sidekick Harry Rapf and was handed a contract at Metro-Goldwyn-Mayer. The studio executives decided to change Lucille’s name to Joan Crawford and the gutsy and determined young girl soon landed tiny parts in several films. As Miss Crawford began to make a name for herself as an exuberant flapper, dollars started pouring in at the box office, and Joan began living like a star. (Joan had been sending her mother a monthly allowance since she began dancing in the chorus).

Anna decided to take advantage of the situation by sending her son to Hollywood to become a star as well—after all, if Lucille could make a success of herself, think what Hal could do? Anna soon followed him and moved in with her daughter, secretly charging a whole new wardrobe to Joan and hiding the receipts. Joan responded by buying a house for Anna and Hal, continuing to give the two an allowance for years. Anna joined the Hollywood Mother’s Club and thoroughly enjoyed being Joan Crawford’s mother.

3 thoughts on “Mommie Dearest: A Balanced Look at “Stage Mothers” and Their Relationship with Their Movie Star Daughters”